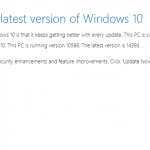 A year after Microsoft released Windows 10, they have released the first major update to the operating system.  The upgrade has started rolling out the first week of August 2016, and it will target newer computers first.  So it may be a while before a Windows 10 PC discovers the update.  There is a way to force the update, so if you don’t want to wait, there’s something you can do.

Visit the Microsoft Support site here and click the button labeled “Get the Anniversary Update Now”.  A small executable file will download and running it will do a quick check to see if your computer meets the requirements.  After initiated the upgrade, the download and installation took about an hour and 15 minutes on my computer.

Some of the changes in the Anniversary update include:
Cortana-  Now you can interact with Cortana without unlocking your device.
Power Management- Improvements to Microsoft Edge to get more life out of your laptop’s battery.
Security- Window Hello allows users to use strong security of Windows apps and Microsoft Edge.
Windows Store- Changes to make it easier to shop for apps, games, movies, music and more.
Microsoft Edge- New extensions coming soon to allow more customization for the browsing experience.