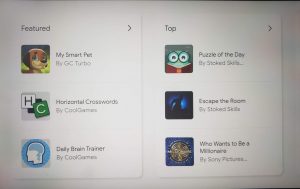 Google Assistant for smart displays, including the Nest Hub and Lenovo Smart Display, recently improved game playing by adding new games that take advantage of displays. You can access these games by saying “Hey Google, Let’s play a game” or by tapping on the “Let’s play a game” image on the home page of the display.

Two game categories appear- Featured and Top. Some games currently found under Featured include: My Smart Pet, Horizontal Crosswords and Daily Brain Trainer. Games currently under the Top category include: Puzzle of the Day, Escape the Room, Game of Words, Voice Quest, Song Quiz and Who Wants to be a Millionare.

Some of the available games are multiplayer games, including: Guess the Drawing, Are you Feeling Lucky? and Trivia Crack. If you know the name of the game you wish to play, you can bypass the selection screens by saying “Hey Google, play Who Want to be a Millionaire”. In addition to the games that appear in the game categories on the screen, there are many others available by telling the assistant a more general command like “Let’s play a trivia game”. You’ll then be presented with a dozen or so game options.