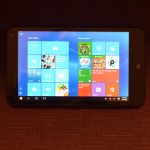 In late 2014, I saw a good deal on a Windows tablet and thought that I would give it a try.  So I bought the HP Stream 7″ tablet for $80.  It was running Windows 8.1., and I soon found out that many popular apps were not available in the Windows app Store.  There was a Facebook and Twitter app, but none for YouTube, Instagram, or Pinterest. Over the next year and a half, I hardly ever used this tablet.  I would turn it on every few months, get the Windows updates and check to see if anything interesting had become available in the app store.  More apps were available, but still many shortcomings when it came to popular apps.

It took several months after the Windows 10 release, before I saw my tablet “pass” the Windows 10 requirement, however, I read a few posts where people said that upgrading caused the blue screen of death, and other major problems.

I decided that I should create a restore media, just in case the Windows 10 upgrade turned the tablet into a brick, so that I could easily go back to Windows 8.1, but unfortunately, the tablet can’t create this image on the inserted microSD card. I didn’t have an OTG cable to use a USB drive, so I decided to take Microsoft up on their offer of having the upgrade performed free courtesy of the local Microsoft Store. So I waited until the last day the Windows upgrade was available for free, and took it to the Microsoft Store.  The staff was very helpful and the upgrade was completed 4 hours later.

Having used Windows 10 on a laptop for the past 6 months, I knew my way around and enjoyed the new interface over Windows 8.1 so there wasn’t a learning curve. I tried out Cortana, but kept getting “Something went wrong, try again later”.  I had to setup the mic 3 times before Cortana would hear and answer my request, but after that hassle, Cortana worked well.

I then headed to the Windows app store, hoping for some good news. Disappointment.  Still no official apps for YouTube, Intagram or Pinterest, etc. The Google app does bring in YouTube content, but it’s a clunkier version that what is offered on Android.  Other apps that I often use on my Android tablet (Tivo, LinkedIn, MeetUp) were also not available in the Windows app Store.

I’ll definitely continue to use my Android tablet for most of my tablet needs, but with the fresh Windows 10 upgrade, I will use the HP Stream tablet more often than I did in the past.  Maybe the Windows 10 one year anniversary update will bring some goodies.